On the 1st April 2017,  Club De Petanque D’Adelaide will be celebrating their 40th Anniversary with a dinner at the club.

The club, which is Australia’s oldest pétanque club, would love for as many as possible to come along and help celebrate this milestone.

As always dinner will be by our Master chefs Rada and Claudia, with entertainment provided by Tina.

So please save the date come along and celebrate …more information to follow.

Pre-bookings can be made through Tina at tinastockley@gmail.com or phone 0434604607

The Snake Cup will be held at the Prospect Pétanque Club on Sunday the 26th of March. 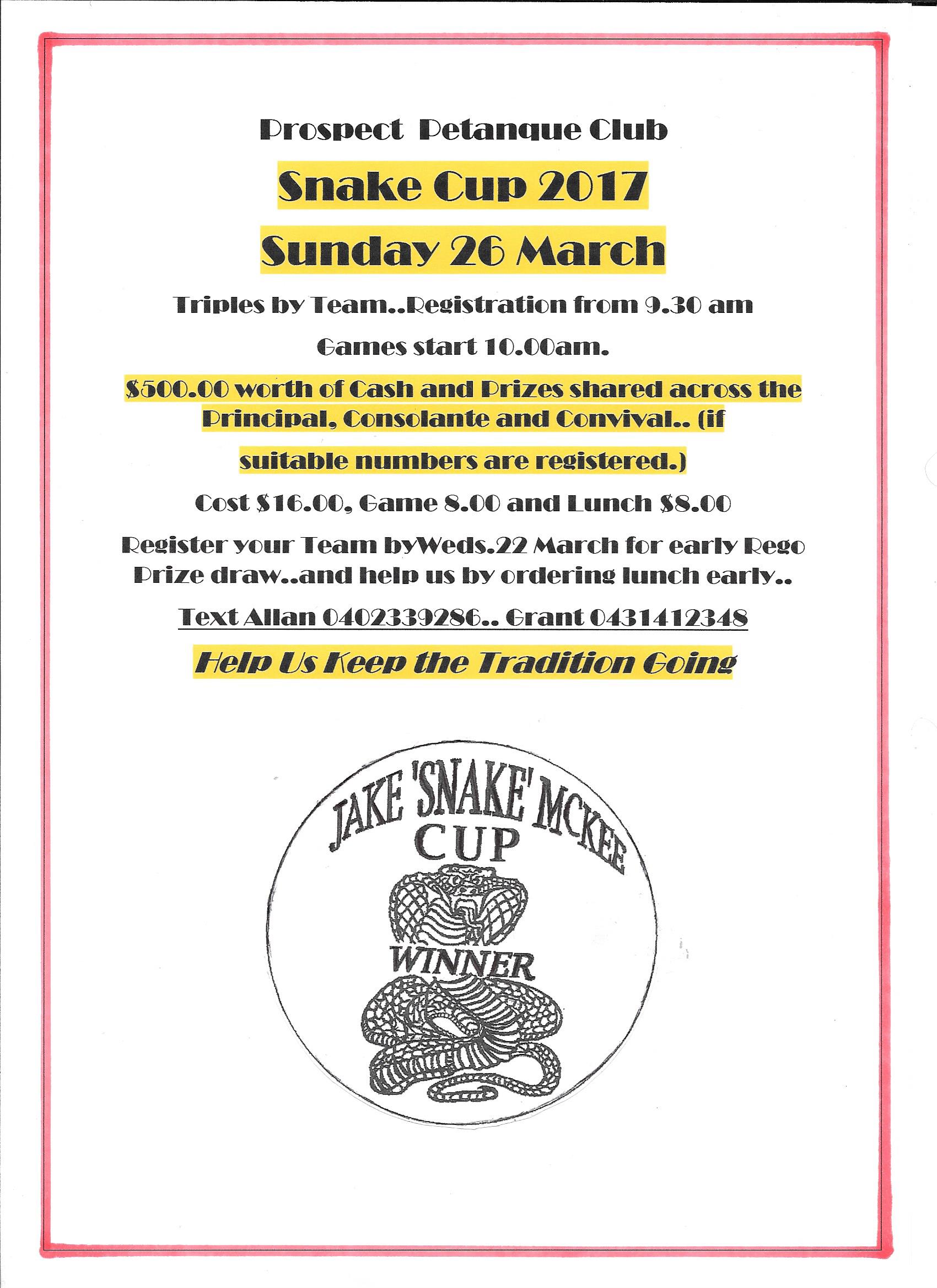 The history of League competition at Stirling is littered with tales of bitter cold and ‘fog so thick you couldn’t see the other end of the piste’, with a common perception that it always rains. Not so this year. After being greeted by a crisp morning chill (just to remind them where they were), the players soon warmed up in the summer sun en route to a very clement maximum of 24 degrees. Lovely.

Symbolic perhaps, but, more important than the weather, this day was particularly significant for the Adelaide Hills club and its relationship with the League. Last season we didn’t get to play there at all due to issues within the club. Then, when the club’s committee subsequently decided not to reaffiliate with the Federation, any members who wanted to participate in League events had no choice but to join another club, which meant there was no longer an AHP team in the interclub competition. It was a very sad state of affairs and there were fears that this loss to the petanque community might become permanent.

Fortunately, however, enough people cared enough to bring about a change in leadership and a subsequent change of direction. The emphasis is now on unity within and engagement without, just as it should be. This was most evident on the 26th, where it was clear that many enthusiastic members had gone to great lengths to ensure the occasion was a success. Their efforts were appreciated by all and everything ran smoothly throughout the day. Many visiting players commented how pleased they were to be back at this wonderful venue. END_OF_DOCUMENT_TOKEN_TO_BE_REPLACED

The challenge is an annual competition between national teams representing Australia and New Zealand and alternates between the countries. This is the first time the event has been held in South Australia.

“We lodged an expression of interest to host this tournament last year and we won the bidding” ESP President Alexi Alexi said “It promotes Adelaide and it provides excitement for the Kiwis and Australians to come and do battle here in Adelaide. “It is the only international pétanque tournament held in Australia.”

The event promises a great weekend of International competition.

After his success in the State Triples competition, Dominique Pierre has been the subject of an article in yesterday’s Sunday Mail (complete with a photo!).

Well done Dom, not only has your success been lauded, but the profile of the game we love has been raised, complete with a mention of the Trans Tasman competition on March 18 and 19. 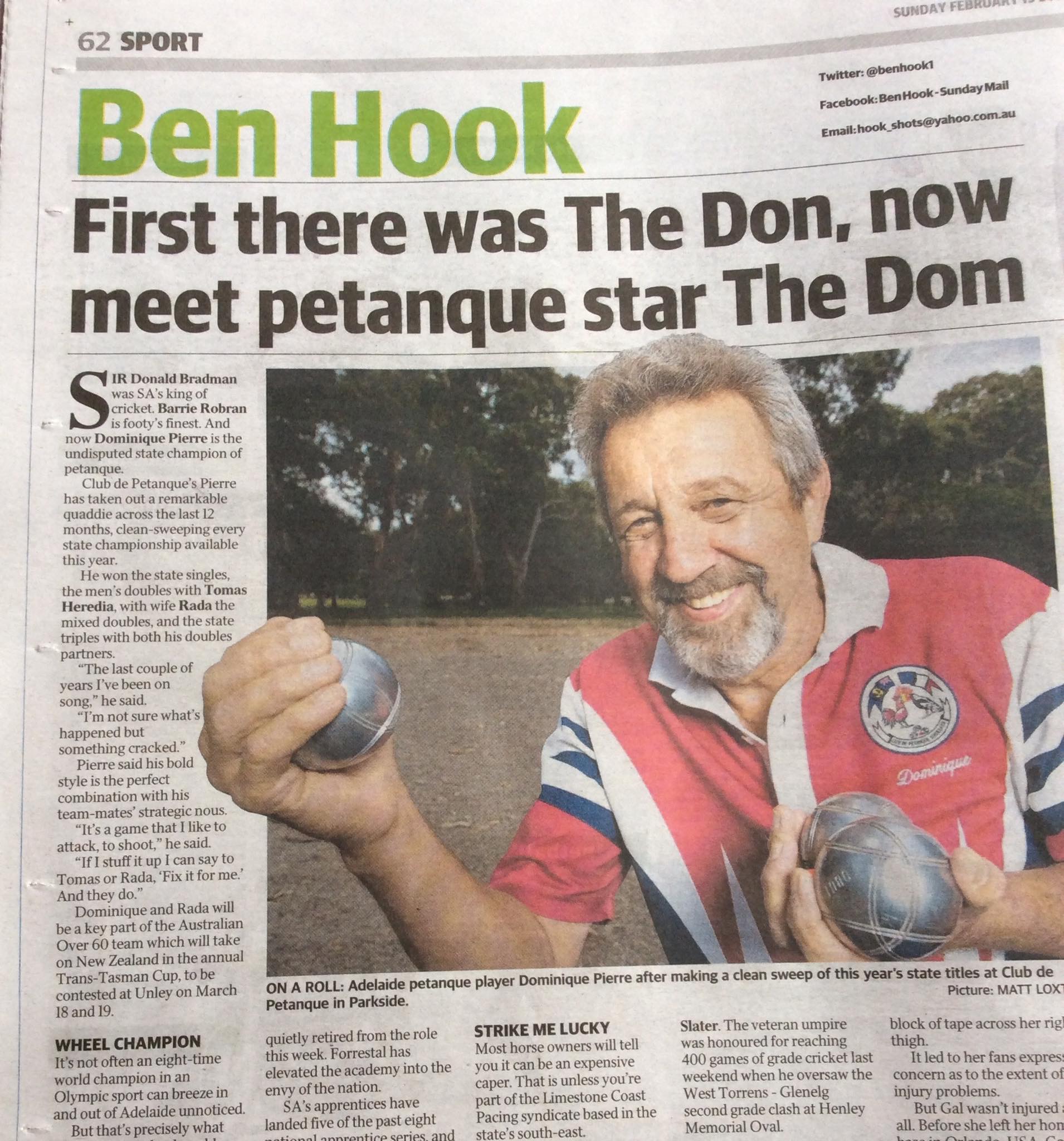 The 2017 Trans Tasman International competition will be held at the Eastern Suburbs Pétanque Club in Adelaide  at their piste at 8 Northgate St, Unley Park on March 18th and 19th.
Come along and see the best Australian and New Zealand players fight for their national honours.

After two cancelled League days due to unfortunately-timed hot weather, we finally got lucky. The State Triples Championship was held in ideal conditions.

The day ran smoothly and it was little surprise that it came down to a final involving the form team of recent times, Rada & Dominique Pierre and Tomas Heredia on the one hand, versus the young guns and proven performers, Lionel Chazal, Raja Jamaleddine and Nick Armstrong on the other.

Ultimately, it was the former who took home the title, in a case of experience triumphing over youthful exuberance. Or perhaps the latter ‘spent too many petrol-tickets’ in a very tense semi-final, when they were forced to claw their way back from a 2-10 deficit against Alexi, Arwed and George, who appeared to be peaking at the right time. Or perhaps their unpopular choice of piste for the final backfired on them. Or perhaps you just can’t beat current form.

The historical significance of this result cannot be overstated… 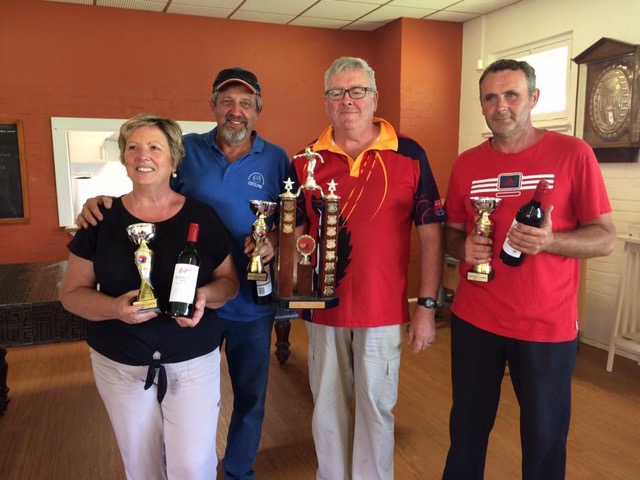 END_OF_DOCUMENT_TOKEN_TO_BE_REPLACED

Game 2 of the Summer Series at the Prospect Pétanque Club will be held on the 4th of March at 6pm. Registration from 5.30pm, games commence at 6.00pm. There will be a prize for early registration by Thursday 2 March.

Game 1 was a great success, playing Pétanque in the COOL of the evening is the way to go.

It is a doubles by team competition with 3 hour long timed games.

The newest club to join the SA Pétanque League will be holding a community event on  February 26th at 10am
Their address is  489 Anzac Hwy, Novar Gardens.

No experience is necessary, just come along and have fun,

We have a legal requirement to hold an Annual General Meeting. However, the AGM should not be considered a chore. It gives us all the opportunity to gather together, review the successes and problems of the past year and to get new people involved in the administration of the League. In this way we will all ensure that the League continues to prosper and grow with the support of clubs and players in its activities and governance.

Each club affiliated to SAPL will, in the near future, receive a formal invitation to be represented at the SAPL Annual General Meeting on Thursday, 28 July at 7 pm in the Club de Petanque d’Adelaide club rooms. END_OF_DOCUMENT_TOKEN_TO_BE_REPLACED