As part of the Adelaide French Festival, volunteers from the South Australian Pétanque community we’re involved in “A French Weekend at Carrick Hill”. The setup by the Carrick Hill Trust around the pistes helped the volunteers to show off pétanque in the best light to the many visitors to the Festival.

Here are a few photos provided by the trust. 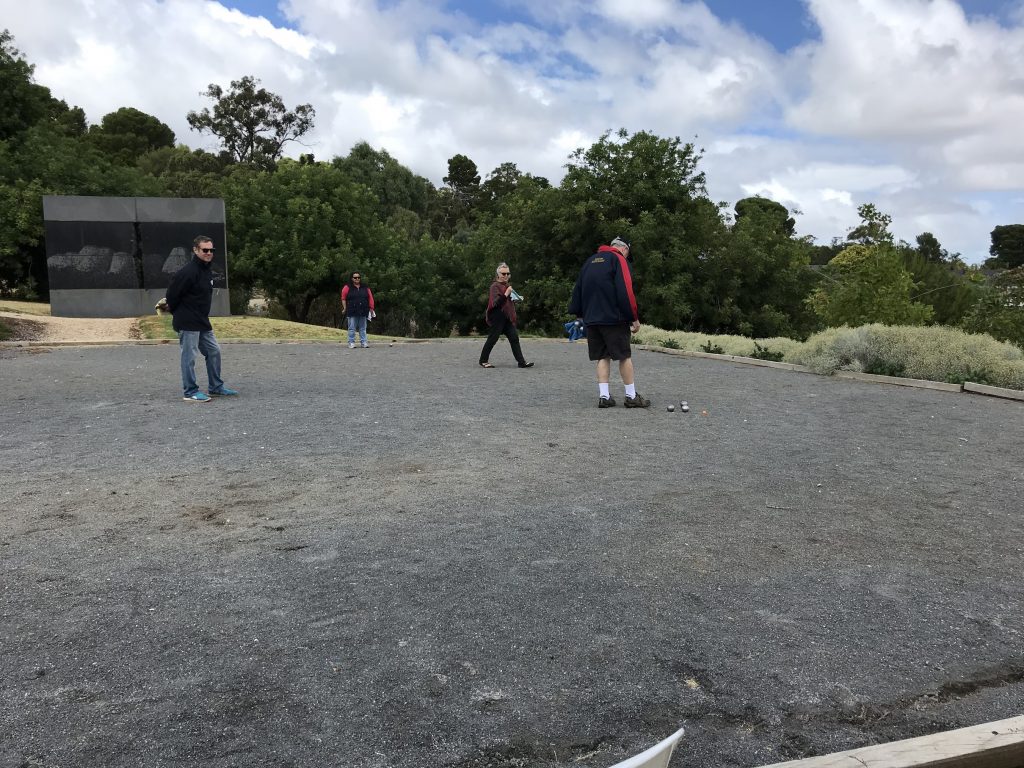 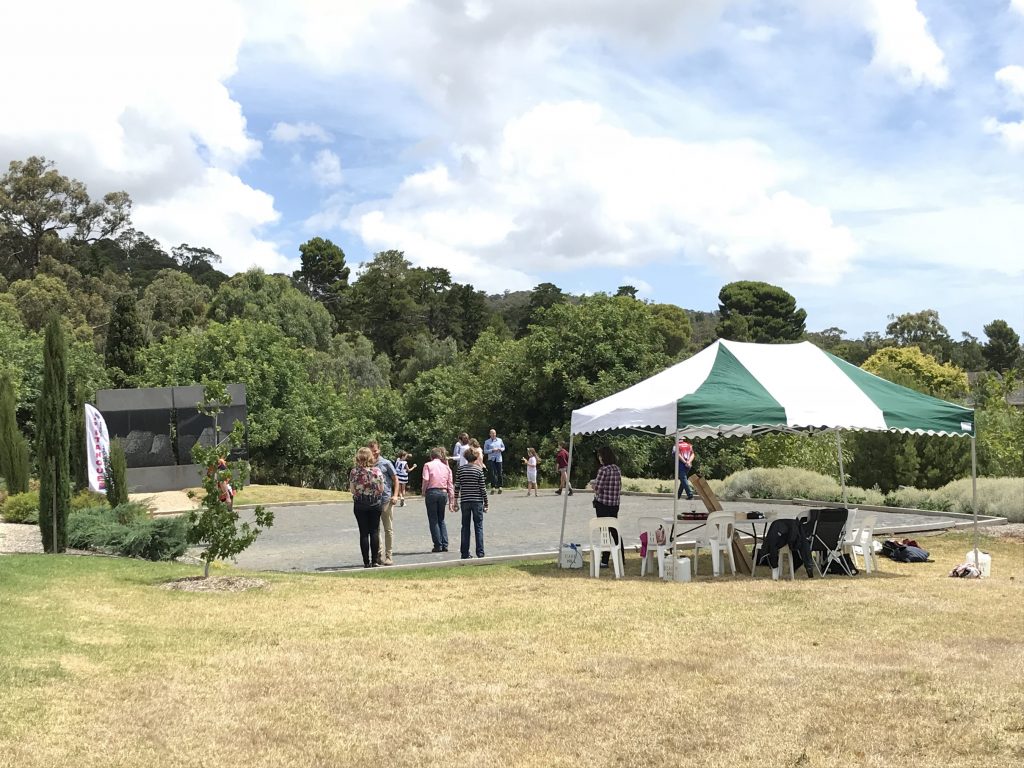 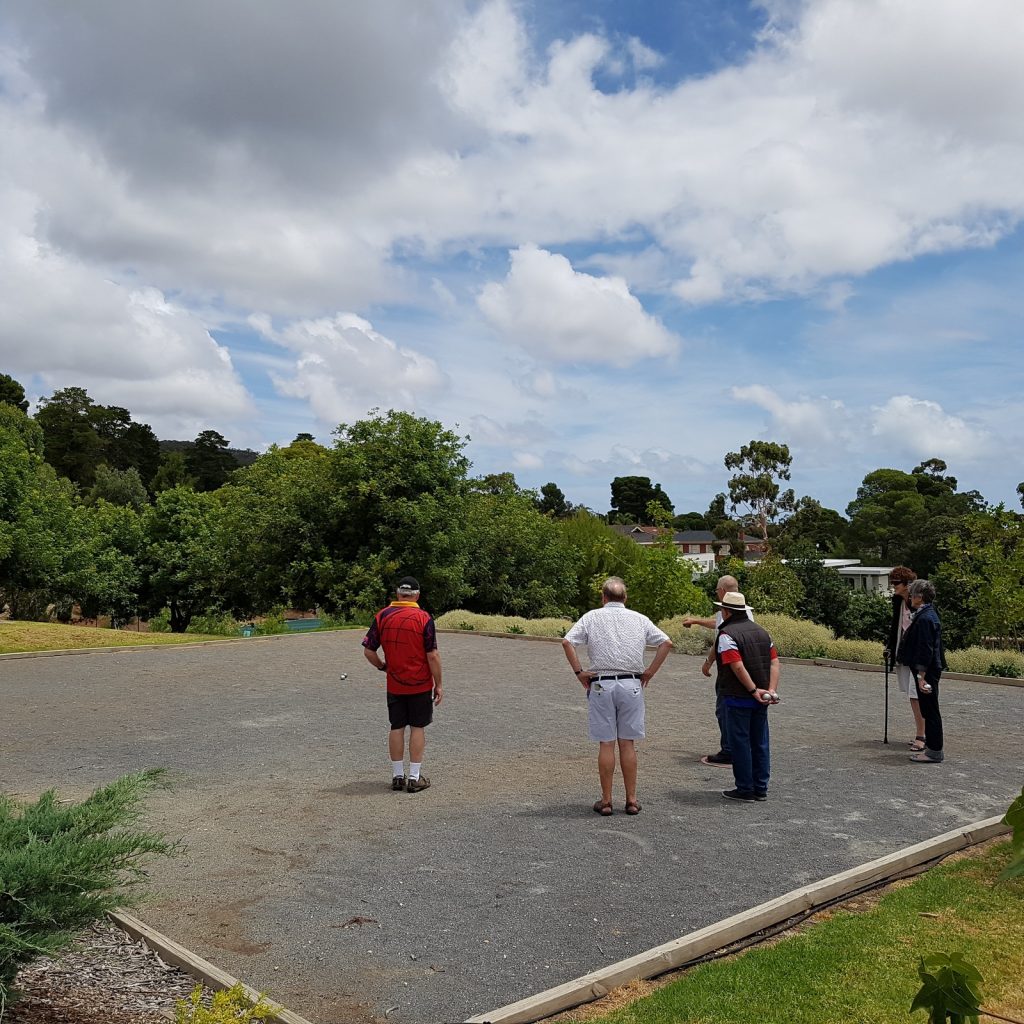 Round 3 came at a time of year when people have many other demands on their time (e.g., test cricket at Adelaide Oval), resulting in a rather disappointing turnout of just fifteen teams. The weather was variable, with players repeatedly exchanging sunglasses for raincoats. But, fortunately, by the end of the day, the former were required far more than the latter.
In terms of the competition, Club d’Adelaide were vulnerable here because they were only fielding one and two-thirds of a team. However, it’s all about quality, not quantity, and they still managed to score more championship points than any of the other clubs and increase their huge lead at the top of the table. In fact, the rewards reaped by all the clubs were fairly reflective of where they stood on the ladder already after the first two rounds. The only change is that Prospect gained a few points on ESP and have now caught up to be equal second.
Stars of the day were Louis Oltarczy, Jean-Paul Bouyer & Adrian Clements, three veterans of the game who have been consistent performers throughout the history of the competition. For Louis and J-P, this was their second gold medal and third top-two finish in the three rounds so far this season — a very impressive effort.
Also on the podium were a few newer players and potential stars of the future. In the second-placed team from Prospect, Melissa Scott collected her first league medal while her partner Gavin backed up his silver from Round 1 with another. In third, Ross Coleman from Adelaide Hills also picked up his first medal.
Thanks to the Gawler club for doing a great job of hosting and to all who participated. END_OF_DOCUMENT_TOKEN_TO_BE_REPLACED

Our newest Club, the Novar Gardens Petanque Club, warmly invites everyone to join them on October 22nd for their first ever SAPL (non sanctioned) calendar event ‘Petanque in the Park’.

The club is situated at 489 Anzac Highway, Novar Gardens.

The cost: $15 for  the games, a BBQ Lunch, Entertainment and Afternoon Tea.

FOR DRAW & CATERING PURPOSES:
PLEASE register your Triples Team no later than Tuesday 10th October
Email: ahambour21@gmail.com or Mob: 0402 109 308
Registration fees will be collected at 10.00am on the day for a prompt 10.30am start
Game Fees: $3.00 for Members, $5.00 for Most Welcome Visitors
A chicken & salad lunch will be available for $10
For catering purposes – please let us know if you will be partaking in lunch when registering
Cash & wine prizes for winners
BYO DRINKS & PERSONALITY
DRESS UP IN HONOUR OF CHRISTOS IF YOU WISH
Please Bring Your Own Chairs & Tables.

The SAPL Mixed Doubles competition was held at the Club de Petanque d’Adelaide​ on the 24 September.

This year’s SAPL Mixed Doubles Championship was well-attended, attracting a strong field of 22 teams. The conditions were windy, but mostly fine and dry.

The new champions in this format are Selina Dally & Nick Armstrong. Their draw in the morning session was far from easy, but Selina & Nick got through undefeated and they went on to finish the day the same way they started — with a hard-fought win over runners-up, Deb Rodda & Lionel Chazal.

We all knew it was only a matter of time before Nick, one of the most promising young players on the scene, would take home his first state title. This breakthrough achievement was well-deserved, and having come tantalisingly close in previous Open Doubles and Open Triples championships would only have added to the sweetness of the moment.

As for Selina, she is an unstoppable force at the moment. When this event was held for the first time last year, Dominique Pierre became the first player in SAPL history to concurrently hold three state titles. With victories in Ladies Singles and Ladies Doubles already under her belt this year, Selina is now the first female player to do so. Of course, Dom went on to achieve ‘absolute legend’ status by also winning the Triples and making it a complete set. Can Selina do the same? We’ll find out in February. END_OF_DOCUMENT_TOKEN_TO_BE_REPLACED

The South Australian Mixed Doubles Championship is to be held on Sunday 24th Sept, 2017, hosted by Club de Pétanque dÁdelaide.

This Tournament is open to PFA Licence holders only.

Bar Licence applies (No BYO please). Lunch will be available.

The playing format will remain flexible until final entry numbers are known.
There will be a consolante for those who do not qualify for the finals.

If unable to attend after registering please contact Tournament Director Anthony Pietsch ASAP
anthony.pietsch@gmail.com or phone 0468 431 963 so appropriate alterations to the draw can be made. 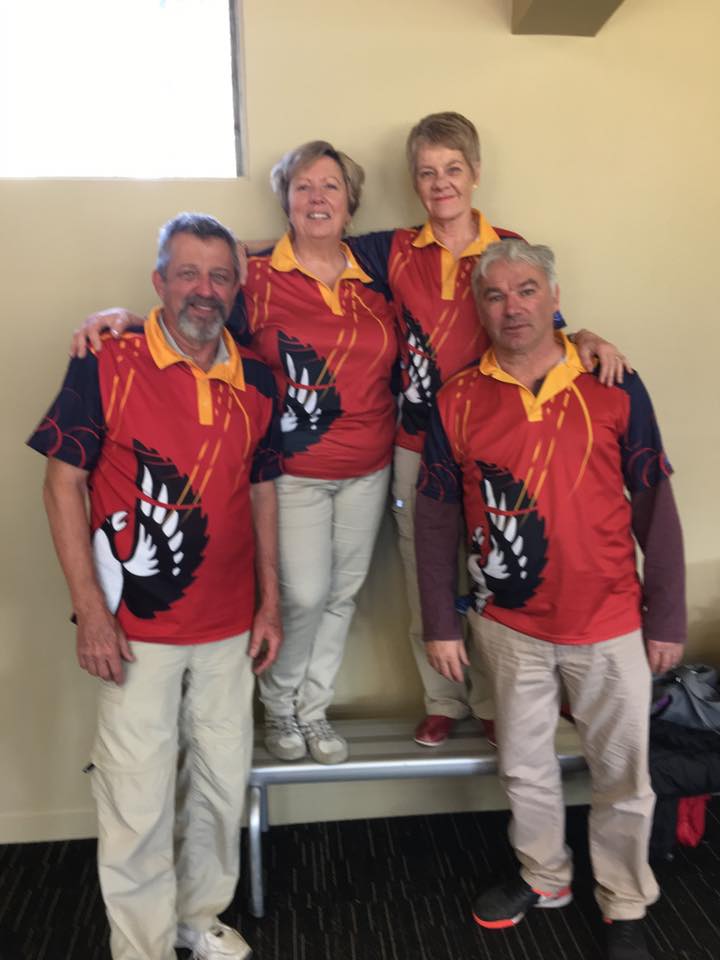 Big congratulations to the team!

The player ratings have been released for the 2016-17 season. 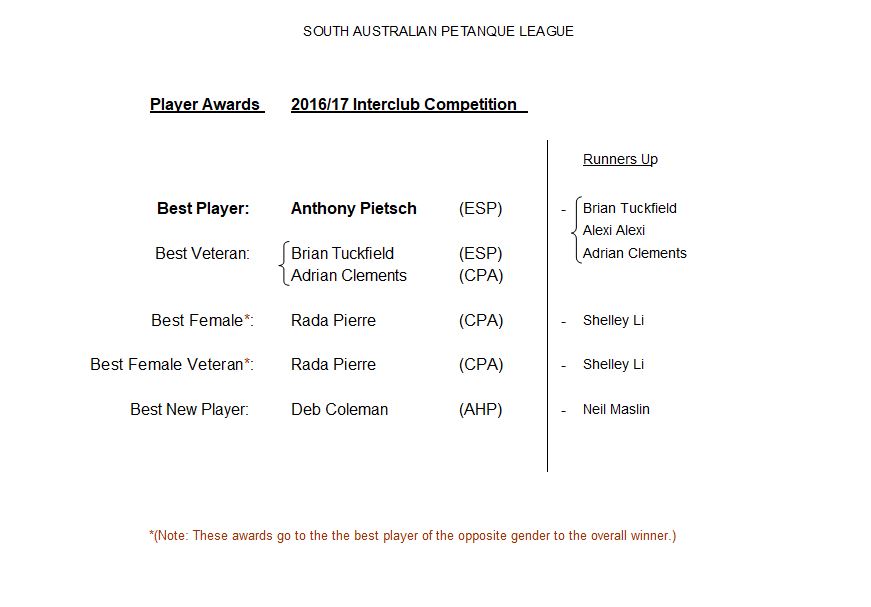 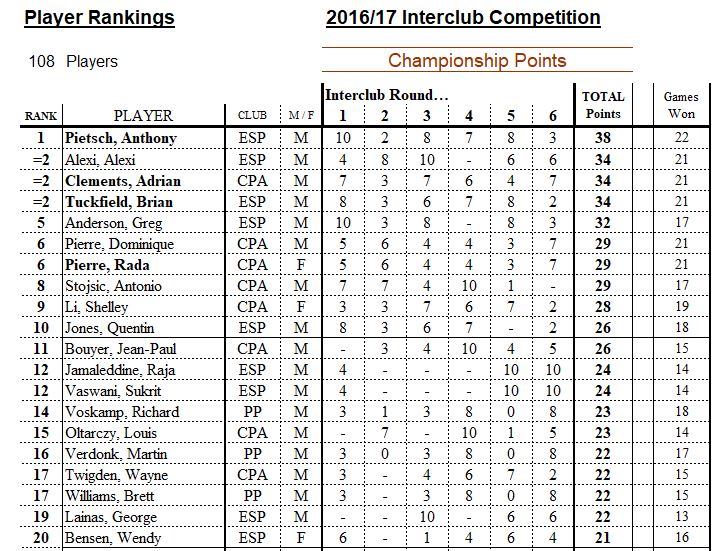 The 2017/18 Interclub season got off to a tempestuous start. Literally. In the face of an ominous weather forecast, 57 brave souls turned up in their wet-weather gear ready to battle it out for their respective club. The fact that there were no late withdrawals or no-shows is, in itself, testament to the dedication and fortitude of this group.

Overnight rain had left the playing surface soft but mostly still playable and, fortunately, it cleared in time for the start of play. The cold wind was cutting, but at least we were lucky enough to get through the three preliminary games with minimal precipitation. Then, at lunch time, the storm hit.

Some of the braver ones ventured out to start their afternoon games in heavy rain, while the more cautious bided their time indoors. (Bravo to the two NGP teams who actually managed to complete their fourth game.) However, reports began to come in of numerous lightning strikes over the Adelaide area. Therefore, the conditions were deemed to be unsafe and play was called to a halt.

As the pistes disappeared one by one under pools of water, and the rain, wind and lightning showed no signs af abating, it soon became obvious that proceedings were finished for the day. It was decided that three out of five games constitutes a quorum, so medals and championship points were awarded, based on the results from the prelims. The early finish left all the footy fans free to get home in time to watch the Showdown (although, after what transpired on that front, some of the Port supporters may have preferred to be out playing pétanque in a storm).

Thanks to the Prospect club for hosting under difficult circumstances.

P.S. Many of the newer players were asking whether this has happened before. Meanwhile, the older heads were reminiscing about THAT day up at Stirling. For the record, this is the first time that play has been abandoned after three games. On April 21st, 2013, at the Adelaide Hills club, the conditions may have been a bit worse…

“The morning was punctuated by several periods of thick fog, at times reducing visibility to about 20 or 30 metres. Those who played will remember these brief periods with fondness, as they were about the only times that the persistent rain and icy-cold winds were simultaneously absent.”

…but at least there was no lightning. On that occasion, 18 teams (of the 22 that had registered) soldiered on to the completion of the fourth game.

END_OF_DOCUMENT_TOKEN_TO_BE_REPLACED

The PFA has it’s first fund-raising effort in association with the Australian Sports Foundation is the HELP GET OUR JUNIORS TO CHINA campaign.

They are looking to raise $10,000 to cover the travel costs of their  4 junior players Bronson Romani, Logan Romani, Zac Diep Nicholson and Khrishika Ramjuttun who are representing Australia in the Junior World Championships in Kaihua, Zhejiang Province, China in November.

The PFA really needs all your help with this, otherwise the cost of getting these great young players to the championship falls on their parents.

The link to the PFA Development Fund is here.

Please share the attached flyer and spread the word with your community of friends, business contacts and any other potential sponsors, it doesn’t matter how big or small the donation is, they will all help to get these guys to China.