Round 3 was hosted by the Gawler club in fine conditions. The November sun was blazing, so the ample provision of shelters was most appreciated, but the air temperature was not too uncomfortable. Twenty-three teams participated, which was the best attendance at Gawler since 2008.

This season is shaping up to be one of the most competitive we have seen for some time. On this occasion, for the second time in a row, five different clubs were represented in the top five finishing positions.

Taking out the bronze medals were Dave Ward, Tory McBride & Lionel Pujol, from Eastern Suburbs. Having won a League round in each of the last four seasons, this team was perfectly poised to extend that remarkable record into a fifth year, but, at the end of the day, weren’t quite able to seal the deal. (Three rounds down and three to go). In the silver medal position was the local team of Dave McKinnon, Glenis Head & Stan Wilson. It’s the second medal for Glenis so far this season, but for Dave it was the first of his pétanquing career. Congratulations. Nevertheless, there was only one undefeated team on the day and that was the reigning state champion combination of Ralph Foster, Brian Tuckfield & Anthony Pietsch, taking some Interclub gold up to ‘them thar Hills’ for the first time in over five years.

These results have given the premiership table quite a shake-up. Gawler doubled their points tally for the season and moved up to sixth place, with a healthy advantage over FAB. Prospect also scored well and climbed two places to fourth, leaving Novar Gardens squeezed in between with a very slender margin on both sides. At the top of the table, a severely depleted ESP squad did enough to maintain their prime position, but they lost ground against their three nearest rivals. Of these, the biggest winner of Round 3 was Adelaide Hills, who have stormed into second place ahead of Club d’Adelaide and are now positioned closer to first than to third. All in all, the remainder of this season promises to be most intriguing.

Thanks to all who attended, to the umpires, and to the small but dedicated Gawler crew who took good care of us on the day. 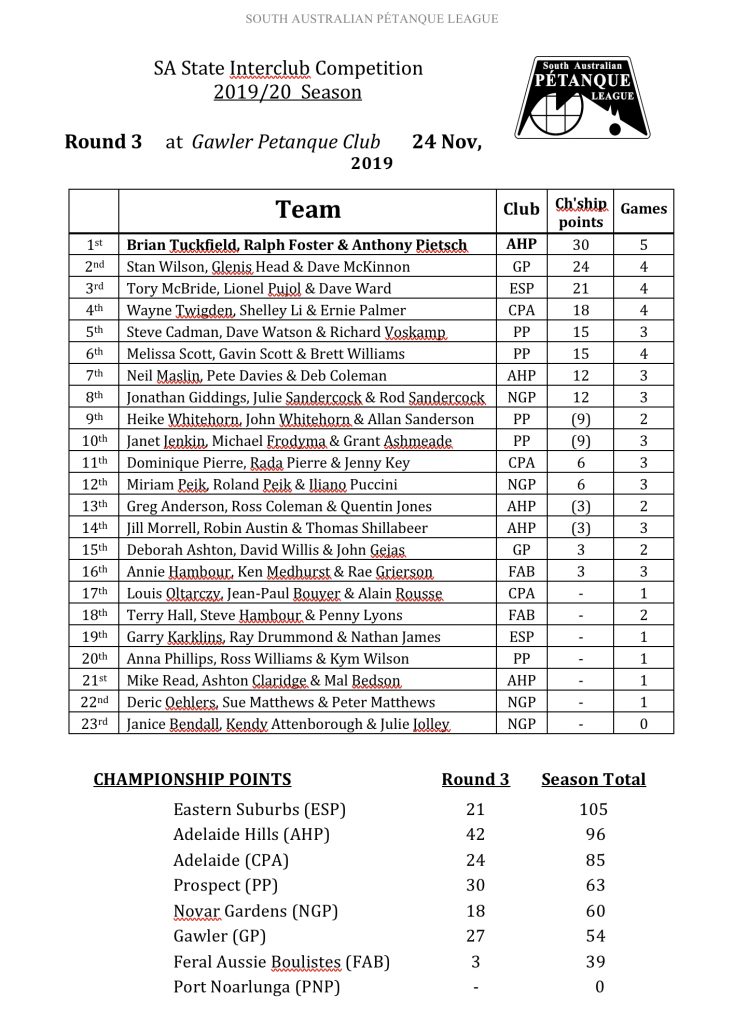