The January round  of the Interclub competition fortunately fell during a brief lull between two prolonged periods of severe hot weather. In fact, it was almost chilly in the morning at Stirling as players arrived. However, it didn’t take long for the fierce summer sun to have an impact. The air temperature was not extreme by any means (29C maximum, believe it or not), but in the sun it felt hotter than that.

Round 4 honours went to the most enduring team in the competition. Tory McBride, Lionel Pujol & Dave Ward have played together as a set combination for many years and have been consistent performers. This victory makes them the first trio to win a League gold medal in each of four consecutive seasons. The silver medallists were Grant Ashmeade, Gavin Scott & Brett Williams.

In the premiership stakes, there were no changes in the pecking order. ESP continue to pull away from the rest of the pack and now have an almost insurmountable lead. However, it looks like second place is still up for grabs with Prospect gaining ground and moving to within striking distance of Club d’Adelaide. As usual, the closest contest is the battle for fifth. In this case, FAB did enough to keep in front of Novar Gardens but the difference between them is now just a solitary point.

For the statistically minded, this round threw up some interesting patterns of results in the preliminary session. On one side of the draw there were three teams that won all three of their games, which in itself is fairly uncommon with a seeded draw. But the results in the other pool were even more unusual in the other direction, in that no teams at all won three out of three. It was odd to get both of these at the same time. In the latter case, a mere two points separated first from fourth within the pool – another thing you don’t see every day. Finally, to cap it off, there were also three pairs of teams (that’s 30% of all the teams) tied on wins and net points after the three games.

Thanks to the host club for their hospitality and excellent food and to everyone else who helped make it such an enjoyable day. 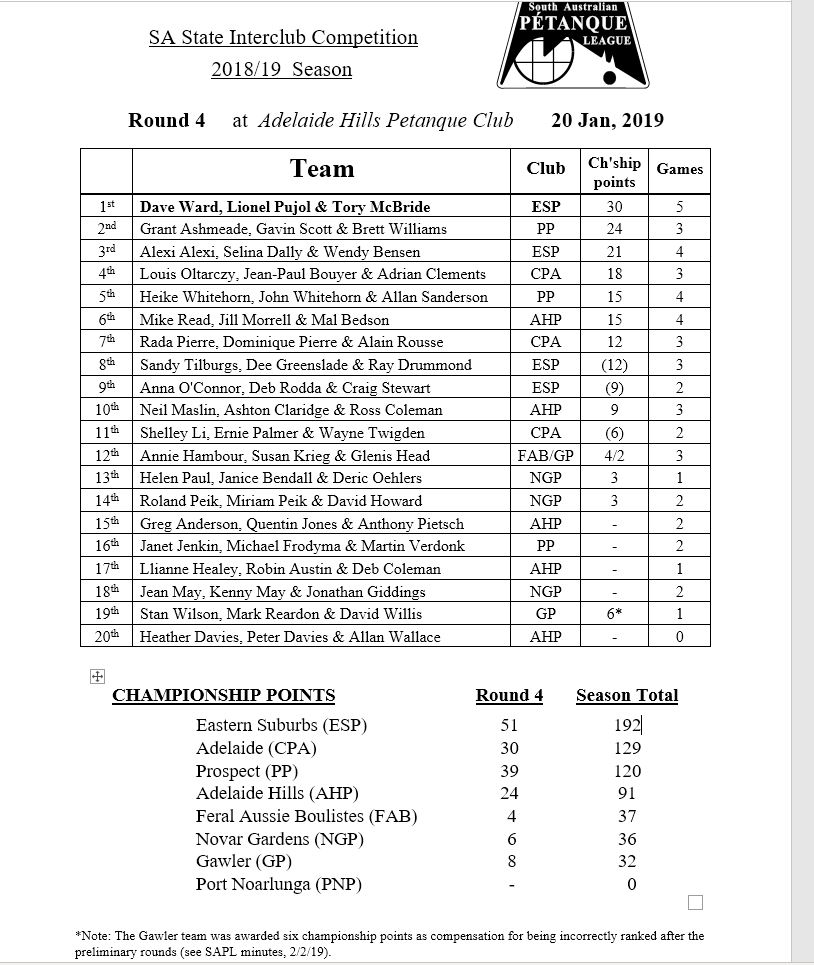