Conditions were cool but fine for the final round of the 2017/18 season at ESP. The turnout was good for this time of year, when so many of our number head north to warmer climes.

In terms of the premiership table, this season has been somewhat lacking in drama. Indeed, apart from one switch between second and third, the top five positions established in Round 1did not change throughout the entire season. Coming into Round 6, the margins between each position were so wide that it would take something quite extraordinary for any of them to change. (Little did we know how close it would come.) The only spot still in close contention was sixth, with Port Noarlunga holding a three point advantage over Novar Gardens. Yet, even this small battle became anticlimactic when the sole PNP team was a late withdrawal due to injury, whereas NGP maximised their chances by fielding five teams.

But the SuperNovars did a bit more than just take sixth place in the championship. In a breakout performance for this fledgling club, Kenny May, Sue Lefevre & Toivo Kangur  defeated several strong opponents to put themselves in a position where they were assured of bringing home the club’s first League medals. They had to settle for bronze in the end, at the hands of Alexi Alexi, Wendy Bensen & Nick Armstrong, but it was an admirable performance nonetheless.

Not to be outdone, Jonathan Giddings, Jean May & Jean-Luc Gonnet, also from Novar Gardens, decided to join the party. Having also qualified strongly, they backed up with two wins in the afternoon to go one better and claim the silver medals (and bragging rights in the May household). These results are a fitting reward for the club that dived into the deep end, starting from scratch, and have breathed new life into the competition along the way. Congratulations to all, particularly Jean‑Luc for such a fine result in his first appearance.

Obviously the battle for sixth turned out to be a walkover, but the surprise was that it became a battle for fifth. Gawler, on 61 pts and 37 clear of their nearest rival, could have been excused for feeling fairly safe in that position, prior to Rd 6. However, the huge haul of 45 points that comes from 2nd and 3rd took Novar Gdns up to 66! But it was a case of ‘just is enough’ for Gawler, whose two teams managed to claim the last two points-scoring positions, earning 6 points between them and holding on to their position by one solitary point.

Finally, congratulations must go to the Club d’Adelaide, whose outstanding performances over the first three rounds gave them a commanding lead, which they held for the rest of the season to reclaim their accustomed position as Interclub champions.

The entire season has been played in the best of spirits and long may that continue. It’s been good to see so many new faces coming into the competition and, as we have just seen, things are likely to hot up as these new players gain experience. Thanks to all who have participated and to ESP for hosting the final round. 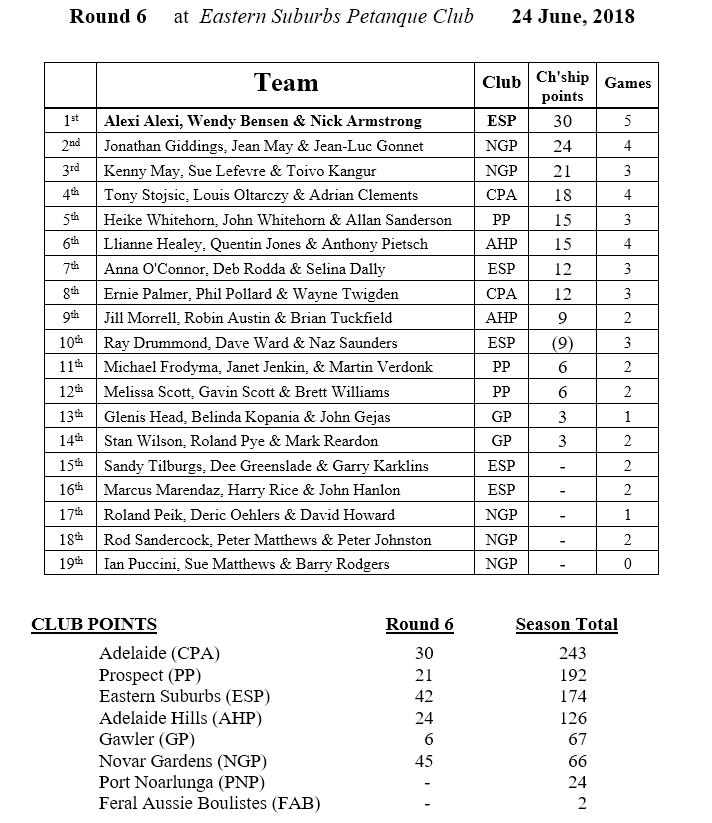