Round 5 was held in ideal conditions. In the picturesque green surrounds of the Gawler Petanue Club, the weather was absolutely perfect — sunny and mild from start to finish. It’s just a shame there weren’t more players there to appreciate it.

Undefeated, they finished with a classic victory over this season’s dominant team, Messieurs Bouyer, Rousse & Oltarczy. The latter had to be content with third place on this occasion. Congratulations in particular to Belinda, taking home a gold medal in just her second outing, and to Glenis for her first Interclub gold. Well done also to Adrian Clements, Wayne Twigden & Ernie Palmer, in the silver medal position.

In terms of the season’s championship, with one round to go, it appears that this won’t be one of those cliffhangers that we’ve had in years gone by. Adelaide only had two teams this time but they finished 2nd and 3rd — enough to re-establish a commanding lead at the top of the table. Prospect, in second, are still a mathematical chance but that is all. However, their advantage over third-placed ESP is of a similar magnitude.

Similarly, Adelaide Hills appear to have fourth place all sewn up while unable to make any inroads towards third. Interestingly, AHP and ESP have been tracking in parallel over the last three rounds (24, 21 & 21 points and 27, 21, 21, respectively).

Not surprisingly, the big improvers in Round 5 were Gawler. With two teams in the points, including the big one, their tally for the season has more than doubled and they are now well clear of the pack that were fighting for fifth.

Barring something quite extraordinary, the only position realistically still up for grabs is sixth. Novar Gardens are improving all the time and have now edged to within three points of Port Noarlunga. The outcome of this particular battle will not be decided until June.

Thanks to all who participated. Commiserations to those who didn’t. You missed out on a glorious day and some wonderful hospitality from the Gawler club. 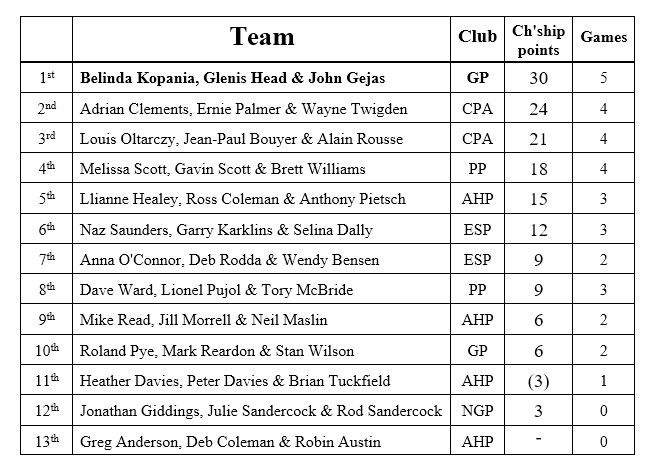